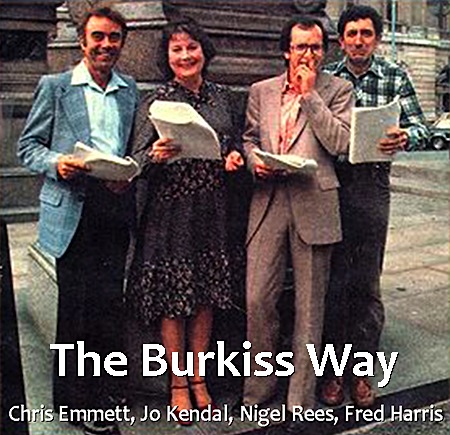 BBC Radio 4 comedy sketch show written mainly by Andrew Marshall and David Renwick, starring Chris Emmett, Fred Harris, Jo Kendal, Nigel Rees and Denise Coffey, broadcast in 47 episodes (or Lessons) from 1976 to 1980 (following the 2 pilot shows broadcast on Radio 3 in 1975 as The Half Open University), and later reincarnated on television as End Of Part One broadcast on ITV from 1979 to 1980.
The show purported to be A Correspondence Course in Dynamic Living but was actually a series of sketches which blended into each other in a stream of pun-laden surrealism. A worthy successor to The Goon Show and I'm Sorry I'll Read That Again, it stretched the medium of radio to even greater lengths of absurdity. Most of the later programmes had a remarkably complex structure as the programme temporarily left one sketch to join another, often returning to the original sketch much later in the programme. A programme might be dropped on the floor and broken, only to be reassembled in the wrong order, or the closing credits might appear at the beginning of the show, which would then work its way methodically backwards to finish at the beginning. Lesson 31 and Lesson 32 are a single episode masquerading as two half-episodes, the first of which ends series 3 and the second of which begins series 4. There are two Lesson 39's, both entitled Repeat Yourself the Burkiss Way, which have identical beginnings. Lesson 28 and Lesson 47 were cut short by BBC censorship although the latter was restored in 2009.